What is/was your full time occupation?
I was a telephone engineer.

When did you first become interested in photography?
It would have been in the late 1950’s probably 1958.

Is there a photographer that inspired and influenced you and you would have liked to have been able to spend a day with?
That would be Ansel Adams. I admired his black and white work.

Is there one photograph by anyone in the past that you especially admire?
It would be one taken from his collection of images in the Yosemite National Park in the USA.

What was your first camera and how did you come to buy it?
A Kodak Colour Snap 828 film camera. The format was slightly larger than 35mm. I took it to Italy and took some transparencies. They were developed and put in a 35mm size frame so that they could be used in a 35mm slide projector.

Which camera have you owned that you have a special affection for?
It would be a Leica. I have owned every version from the M3 to the M7 and every Reflex up to the R8. The Leica M7 was my favourite. In Australia I was a member of the Leica Society.

What is your current camera(s) and lens(es) set up and how long have you had it?
I have a lightweight set up now with zoom lenses which suit my needs adequately. I have a Leica D-Lux (Typ 109) Compact and the smaller Leica C and I have had them for four to five years.

What is your typical kit set up for a day out?
I have five or six camera bags to choose from. Normally I would take both of my cameras. There is also a small Gitzo tripod, spare batteries and SD cards.

What camera would you currently like to own if it was possible?
Probably a Leica Q. I haven’t handled one yet to know for sure. Many of the cameras in the Leica full frame line up are very, very expensive.

Do you find it difficult to resist the temptation to buy the latest equipment?
I’m age 89 and too old to be bothered now.

Do you have a particular number of genres that you favour and concentrate on?
It would be General Pictorial mostly with Landscapes as well like Ansell Adams.

Is there just one favourite photograph that you have taken which you are really proud of and why?
Seven years ago I took a Black and White photograph on film of Pershore Abbey. The light was really incredible. 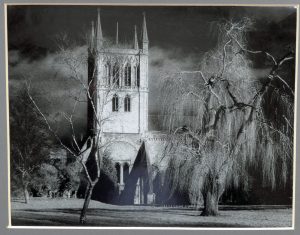 Have there been any amusing or memorable incidents when taking photographs?
My late wife once persuaded me to go with her on a bus trip to Scotland. I was hopeful of some good landscape photos. I was really annoyed at the number of good shots that I missed because the bus didn’t stop. I ended up upset and bored.

Is there a difficult image that you would still like to capture?
I would like to go to the Lake District and be lucky with the light.

What made you start to work towards obtaining photographic awards and distinctions?
I just thought it would be something to aim for. I did it in Australia. I did the AAPS Straight away in Australia. Then I did the same with the Royal when I returned to the UK. In the UK I did the Licence first and then the Associate. I would like to have gone for the Fellowship but never had the required 20 prints to put together. I have not been a member of the Royal for some time. The distance to Bath and the annual membership costs influenced this decision.

Did anyone help and influence you on the way to attaining your goals?
No, not really. I just used my own experience.

Are there any tips you can pass on to members considering starting on the path to an award?
Observe and Study other people’s successful work e.g. Smethwick Club. Get advice from people who are successful. Visit the International Exhibition at Smethwick and note composition, lighting, the thirds rule and a general appreciation of what makes a good photograph.

What computer, monitor and editing software do you use?
None. I use my camera PictBridge to do my printing.

Do you do your own printing, if so what printer do you use?
Yes. I have two printers. An Epson 2880 which is an A3 printer with 8 ink cartridges. I also have an Epson R750 office A4 printer.

What was the best picture you failed to get and why?
There was a picture opportunity that I missed along Weston Super Mare sea front with 2 women in black clothing eating contrasting white ice creams. It would have been a credit to Henri Cartier Bresson and social documentary but I missed that “Decisive moment”.

If you were a professional photographer for a day, who/what and where would you like to photograph?
Yosemite National Park in the USA or Scotland in good weather.

What do people say about photography that makes your hackles rise?
I get a bit fed up with judges sometimes especially those that are full of themselves.

What piece of photographic wisdom would you like to share with BPS members?
Always have a camera with you. Even small compacts nowadays will give you a good result. Getting the shot is most important.

Do you have a photographic philosophy that keeps you going?
Be open-minded about other people’s work. Try and appreciate their work and preferences. Horace still keeps to his own General Pictorial style and portraits.